So much wonder and excitement is the life of a two-year old. Making a cake for Grandma is the most exhilarating task in the world — a cascading of mispronounced explanations, jumps and claps and eyes as big as softballs. Similarly, a bug in the house creates pointing and running to announce. With a package delivery comes guessing about its contents, which is most definitely probably always a truck.

Still, an over-tired moment or whatever absence he can muster into an injustice can erupt into screams and moans, calls out to Daddy or Emma (Grandma). A theft of a park sandbox bucket is a moral abomination as is the denial of a particular snack.

Those behaviors resemble the mood swing of the newly postpartum mom. Little sleep changes emotions–a lot. A ten-minute nap renews the world. A glass of wine can bring giddy jubilation or severe depression. A lovely Facebook image can bring me to tears.  And two seconds later, I may be laughing. As my friend Mal — who had a baby on the exact same day– said, ‘lately, I could win an Oscar’.

Beyoncé nailed it when she sang, ‘one day you screamin’ you love me loud,/the next day you’re so cold’ (Holy Grail).

For me these last two months, the ‘toddler’ highs & lows come in a series of small vignettes. My anxiety peaked twice yesterday. First, when the baby was screaming so loud in the car he started foaming at the mouth. And later, while I sat nursing Duncan contentedly at the park, I suddenly realized Ian had just climbed all the way to the top of the highest part of the slide structure.

Mostly, though, glowing moments wash over anxiety and disbelief to expose a huge amount of love and grace within the stress and confusion of parenting two. Yesterday, Ian and I got Duncan to laugh. His smile enveloped his whole face while the sun and cool summer breezes poured in through the window, and it was just like my favorite book to read to Ian, All The World, “hope and peace and love and trust.”  There two brothers grinned at each other, one two years and the other two months, and it was the most lovely thing in all the world, and I felt I was exactly where I was supposed to be and everything was deeply good.

What we, the toddler and I, are doing is feeling every second immensely, radically.   As Annie Dillard wrote, “How we spend our days is, of course, how we spend our lives. What we do with this hour, and that one, is what we are doing”  (The Writing Life).  And finding balance and focusing on those moments full of grace is what I’m doing. 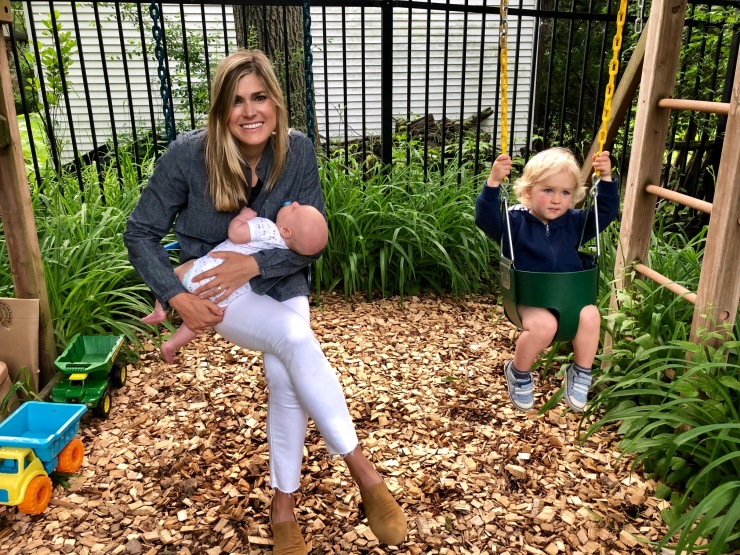